Three months on from its launch, we’ve outlined some of the impacts of the single-use carrier bag charge on retailers and customers that we’ve encountered

1. Supermarkets are pushing stronger “bags for life” for personal profit

Not all plastic bags are chargeable by law; some of the larger ‘bag for life’ style plastic bags are actually exempt from the charge because they fall outside the definition of “Single Use Carrier Bag”.

We’re used to paying for ‘bags for life’, so it’s not a big surprise to be offered them at the checkout too.

The charge states that the 5p that you pay for a single-use bag must be donated to local good causes (minus the cost of bags, VAT and some other expenses). As for the 6p for a multi-use bag that isn’t covered by the charge? Well, all of that can go directly into the pocket of the retailer, so it’s naturally in their interest to encourage you to buy the thicker bags.

2. Retailers that don’t have to charge are charging

We’ve noticed a huge trend: women are organised and are taking shopping bags with them. Men (on the whole) are lazy and less bothered about the charge and are paying the 5p. In a survey of our customers, we found that 82% of women took bags when shopping, compared to only 24% of men. 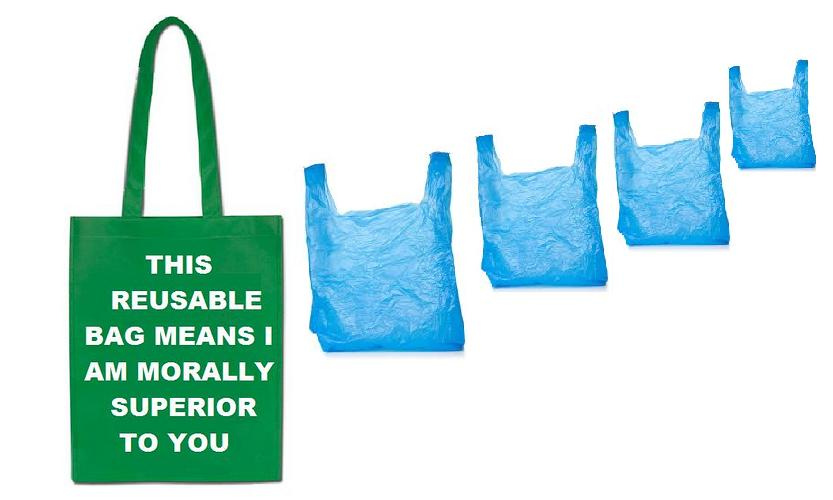 One thing that we highlighted as a potential problem before the charge was introduced was the lack of consistency throughout the UK.  The rules in Scotland, Wales and England are very different. We’ve had feedback from a number of our customers that English visitors in Scotland and Wales are complaining when being charged for paper bags, as they expect them to be exempt as they are in England. However in Scotland in Wales, they’re not.

After the initial hype and a huge amount of coverage in the news, it’s business as usual and people are quickly getting used to the 5p charge. As many older customers have pointed out, we’re only going back to the 70s and early 80s when “people were very used to paying for their bags”.

6. Retailers are bearing the brunt of the public’s frustration

It hasn’t been explained to the public clearly enough how the plastic bag charge has been rolled out, or where the proceeds will go to. This has led to resentment towards retailers, who are now trying to make it more prominent where the funds from the charge will end up and specifically to which charities.

One common thing we’ve heard people say is: “If I spend £60 on shopping, why are they charging me?” There is an expectation that the retailer should swallow the charge into their margin.

Unfortunately, even if they can afford to, they are not allowed.

Retailers need to keep very strict records on how many bags are given out and used, and this would make it very difficult to just give them away for free.

Retailers can take the cost of carrier bags out of the 5p charge before any funds are distributed to charities, which makes it more affordable and sensible for people to opt for printed bags.

Wouldn’t you prefer your brand to be promoted on a printed carrier bag for all eyes to see if it didn’t cost much more than plain bags?

All the handy things that we once used the single-use plastic bags for are now becoming more apparent, from bin liners to muddy boot bags and even dog waste bags when taking the dog for a walk!

As sales of cheap, low-end vest plastic bags have decreased, we’ve seen a growth in bin liners, refuse sacks and other poly bags.

In just three months, the plastic bag charge has changed the way that we shop and the way that retailers purchase their packaging.

It would be great to see that this new law has also had some positive impact on our ever changing environment.

To find out more about the plastic bag charge, read our article about who is affected by the new rule, or see our breakdown of the rules here.

Our Kraft Mailing bags are commonly used by retailers and online businesses for shipping small parcels and mail order items. An eco-friendly option, with quality 100gsm kraft paper to give you confidence that your goods will be packaged safely and securely. Kraft Paper Mailing Bags | Carrier Bag Shop ... See MoreSee Less

Luxurious bags to match your brand? We’ve got you covered. Talk to our print team to get designing ... See MoreSee Less

If your looking for ways to elevate your gift giving, check out our videos on a few different ways to tie ribbons on your presents in our latest blog article. blog.carrierbagshop.co.uk/2022/07/27/how-to-tie-ribbons-on-gifts/ ... See MoreSee Less

How to Tie Ribbons on Gifts -

If your looking for ways to elevate your gift giving, check out our videos below on a few different ways to tie ribbons on your presents. Classic Bow Step 1 [...]
View on Facebook
· Share